I have been thinking about the language data marketplace (exchange if one prefers), and the role of archives in a world where minority language speakers are also internet users and digital file consumers. In particular I have been thinking about SIL’s Language and Culture Archive and the economic model called a two sided market. So, SIL as “Partners in Language Development” seems to be well situated for analysis using the two sided market analysis (matching linguist and professionals with language development skills, and persons with language development skills with interested parties in developing their language). On the surface, it seems that the SIL archive would also benefit from being the center of exchange between these same two groups. This is the subject of one of my slides for an upcoming presentation, therefore I sketched out the interactions various SIL staff might have with the archive to see if I could diagram the social interactions around language data in SIL’s two sided market. To my surprise, the two sided nature of access to data in the archive is not supported, thereby blocking a data-centric archiving service. It makes me wonder what the perceived value of the archive really is, and if the perceived value is low, then why bother? What is the return on investment (ROI) for users on either side of the market?

I tried to summarize the relationships between the various clients of the archive in the following image. 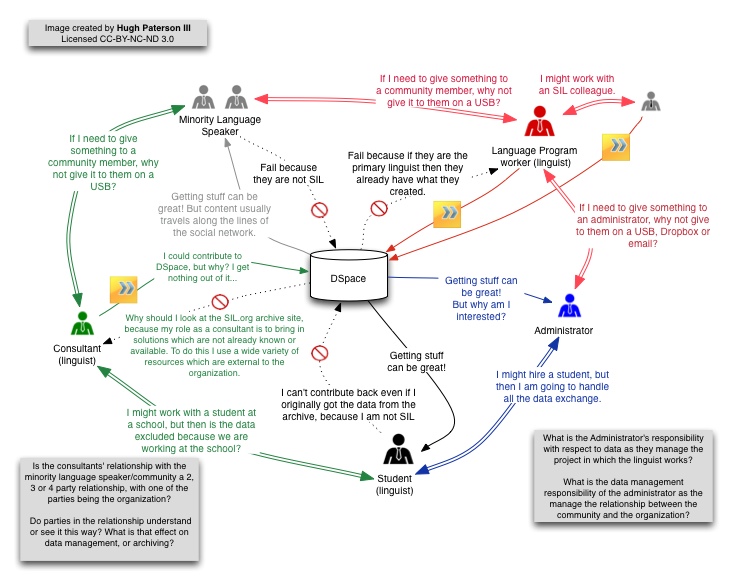 Media and relationships among different roles in SIL projects.

Because I have been on the team doing the SIL.org redesign, I have been looking at the Open Source landscape looking at what is available to connect Drupal with DSpace data stores. We are planning on making DSpace the back-end repository, with another CMS running the presentation and interactive layers. I found a module which parses DSpace's XML feeds in development. However, this is not the only thing that I am looking at. I am also looking at how we might deploy Omeka. Presenting the entire contents of a Digital Language and Culture Archive, and citations for their physical contents is no small task. In addition to past content there is also future content. That is to say archiving is also not devoid of publishing - so there is also the PKP project [sic redundant]. (SIL also currently has a publishing house, whose content need CSV or version control and editorial workflows, which interact with archiving and presentation functions.)

Wally Grotophorst has a really good reflection on Omeaka and DSpace, I am not sure that it is current but it does present the problem space quite well. Tom Scheinfeldt at Omeka also has a nice write up on why Omeka exists, titled "Omeka and It's peers". It is really important to understand Omeka's place in the eco system of content delivery to content consumers by qualified site administrators.

@Mire talks about What DSpace could learn from Omeka.

The company I work for has an archive for many kinds of materials. In recent times this company has moved to start a digital repository using DSpace. To facilitate contributions to the repository the company has built an Adobe AIR app which allows for the uploading of metadata to the metadata elements of DSpace as well as the attachement of the digital item to the proper bitstream. Totally Awesome.

However, one of the challenges is that just because the metadata is curated, collected and properly filed, it does not mean that the metadata is embedded in the digital items uploaded to the repository. PDFs are still being uploaded with the PDF’s author attribute set to Microsoft-Word. Not only is the correct metadata and the wrong metadata in the same place at the same time (and being uploaded at the same time) later, when a consumer of the digital file downloads the file, only the wrong metadata will travel with the file. This is not just happening with PDFs but also with .mp3, .wav, .docx, .mov, .jpg and a slew of other file types.

One way around the limitations of JavaScript itself might be to use JavaScript to call a command-line tool or execute a python, perl, or shell script, or even use a library. There are some technical challenges which need bridged when using these kinds of tools in a cross-platform environment. (Anything from flavors of Linux to, OS X 10.4-10.7 and Windows XP – Current.) This is mostly because of the various ways of implementing scripts on differnt platforms.

The technical challenge is that Adobe AIR is basically a JavaScript environment. As such there are certain technical challenges around implementation of command-line tools like Xpdf from fooLabs and Coherent PDF Tools or Phil Harvey’s ExifTool, Exifv2, pdftk, or even TagLib. One of the things that Adobe AIR can do is call an executable via something called actionscript. There are even examples of how to do this with PDF Metadata. This method uses PurePDF, a complete actionscript PDF library. Actionscript is powerful in and of itself, it can be used to call the XMP metadata of a PDF, Though one could use it to call on Java to do the same “work”.