This week the BBC published a piece about an ongoing discussion between Piers Morgan and a Texan who has called for his deportation. The Texan says that Piers is fighting against the constitution by fighting for gun control (and therefore should be deported as non-national fighting to undermine U.S. laws). Piers responds saying that his voice should be protected under freedom of speech. I want to ask: But should it? I guess there are several ways this could be interpreted. One of them would be to consider if Piers is a British subject and not a citizen of the US and therefore because he is not a U.S. Citizen that U.S. laws do not apply to non-citizens and therefore he is not protected by U.S. freedom of speech protections. At which time, if he were deported he could continue his media campaign from the UK and be just as vocal and active because his role is and instrument and visibility is global in nature not geographically bound - he is a voice of internet proportions. But deportation is an official statement, not just by the institution of government but also by the current ruling party in the U.S. Piers' position seems to be in line with that party's position. So, expecting actions like a deportation from the current party would probably not be an expectation well rewarded. If Piers is indeed a US citizen then his personal voice is protected by the first amendment.
However another way to look at the situation is: is he in this capacity speaking from his personal capacity? Or is he speaking from the capacity of the organization from which he is hired? If he is hired to say these things, that is speaking from his professional capacity, then is he still protected under the first amendment, if the corporation is a US corporation? For that matter is anything said using a US company's communication platform a US concern. --> so a use of Twitter or YouTube is that freedom of speech even if it is used by a person of non-US citizenship?

I was rather shocked when I heard about the Riots in the UK. The UK‽ Really‽ That’s different. Kind of disturbing really. (Not that the BBC’s Photographs don’t make the situation look like a scene from V for Vendetta.) 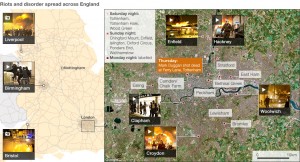 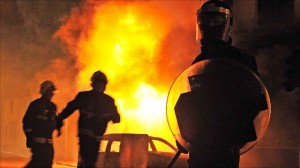 I got to thinking about some of the implications of the reporting coming out of the BBC.

And I was told that there was some use of social media platforms like FaceBook and Twitter. In particular, Facebook groups. Allegedly, locals on Facebook were reporting the groups as fast as they were being created. An interesting social dynamic as opposing social forces collide. I got to thinking about these alleged locals using social media and wondered: What if someone who was not in the UK was organizing or creating the Facebook groups. That would be something. It would be a way that sympathizers who were not local or in the UK could lend a hand to people on the ground. This lead me to think about how would law enforcement react to this sort of help to the rioters.

Law in the U.S.A. is different than in the U.K. But none the less if it were in the U.S. and people were to lend a hand then those lending a hand might be considered to be Terrorist. Using the definition preferred by the state department, terrorism is: “Premeditated, politically motivated violence perpetrated against noncombatant* targets by subnational groups or clandestine agents, usually intended to influence an audience.” [Quote taken from The definition of terrorism]. One thing that I see in the current news is that there is no political motivation. So some might say that this is not terrorism because it lacks motive.

But if it were terrorism, and the individuals were known through FaceBook, would the UK ask for their extradition to the UK? – to put them on trial as terrorists? Would UK law apply outside of the UK? If the person is creating a FaceBook group and is doing from outside of the UK and several blokes join a group does that make the creator of the group a terrorist? and also guilty of breaking UK law? Can someone break another country’s law without leaving their current country – even country of citizenship? What gives the UK legal rights prosecute?

The other thing which is disturbing in this social media business is the global social reaction to the difference between what is happening in the UK right now and what happened in Libya, Morocco, Egypt, and Syria earlier this year. Social media was part of that unrest as well, however, political motivation was definitely part of that. Yet the rioting was deemed to be for a “worthy” cause. Yet if the same actions were taken in the U.S. we would call it Terrorism. I think The Guardian really points out some of the idiosyncrasy of the U.S. definition and the application of the term Terrorism as it relates to crime.