My father-in-law, who is in his 80’s started reading the recently released biography on Steve Jobs by Walter Isaacson[ref 1] . 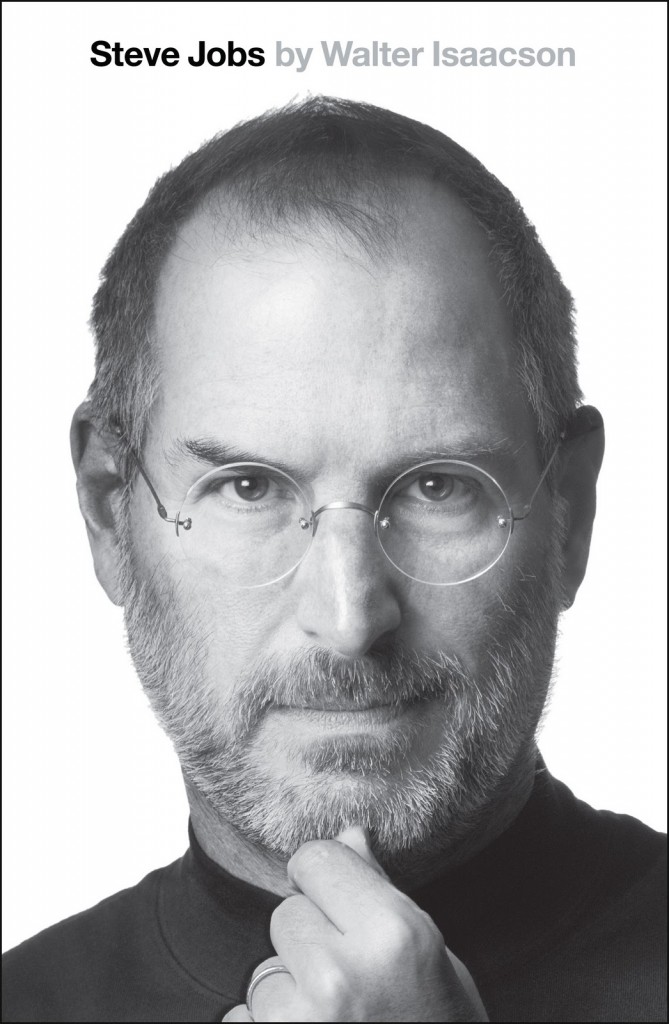 Jim (my father-in-law) has known that I am a Mac user and an advocate and have been for some time. So naturally this book became a conversation piece during one of our visits. Jim began to sing the praises of the book and the story and then said I should read it. So I looked at the book and noticed the san-serif Helvitica style (probably MyridPro) font in the title and thought to myself this book can’t be too bad right? I usually eschew most book reading and most reading which does not fall into the categories of linguistics, user experience design, business use cases (marketing and services issues), or the transferring of knowledge for learning (pedagogy). Steve has never been my “hero” but he has been a man of whom, I was aware, who was influential in shaping the world I grew up in. I have always enjoyed good design and Steve Jobs has given me words to go with my passion for good design.[ref 2]
httpvh://youtu.be/eAo8gnUCWzE

During my formative years my dad, also pushed me to innovate and to think outside the box. He has also challenged me to not be satisfied with the status quo. This is something I have also found that Apple was able to put words to[ref 3] .

So it was not too difficult to pick up the book and began to read (mostly the picture captions and the introduction). I was immediately drawn into the book, as the author is a good story teller too. Several things so far have inspired me to think, as I ponder consumers, producers, the service industry, businesses which run as services, “missions as business”[ref 4] [ref 5] [ref 6] , the business of running a mission, the business of running a business which functions as a service and also the business doing humanitarian good around the world.[ref 7]

As I mentally contrast the difference between user experience and customer service[ref 8] in these various business contexts I think of the words of Joshua Porter:

But what if the firm was driven, not by the goal of short-term profitability, but by the goal of continuous innovation in service of finding new ways of delighting customers? The new bottom line of this kind of organization becomes whether the customer is delighted. Conventional financial measures such as maximizing shareholder value are subordinated to the new bottom line. Profit is a result, not a goal.

It is with this thought as as background that two small bits from Isaacson have stood out so far: the first from page xxi:

This is also, I hope a book about innovation. At a time when the United States is seeking ways to sustain its innovative edge, and when societies around the world are trying to build creative digital-age economies, Jobs stands as the ultimate icon of inventiveness, imagination, and sustained innovation. He knew that the best way to create value in the twenty-first century was to connect creativity with technology, so he built a company where leaps of the imagination were combined with remarkable feats of engineering. He and his colleagues at Apple were able to think differently: They developed not merely modest product advances based on focus groups, but whole new devices and services that consumers did not yet know they needed. [emphasis mine]

With regards to inventing new products, I remember when the iBook clamshell came out when I was in High-School. I remember using SoundJam MP, the predecessor to iTunes. I remember when iTunes became a store, and made legally acquiring music more efficient than downloading music through the gnutella network (Napster and peer-to-peer networks)[ref 9][ref 10][ref 11][ref 12][ref 13] . I also remember when the iPad came out. 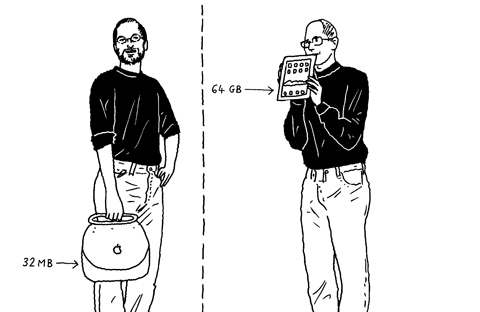 Steve Jobs with iBook and iPad. Image from: disegnomagazine.com

The second thing that Isaacson wrote was a caption on photo:

In his [Steve Jobs’] Apple office, 1982: Asked if he wanted to do market research, he said, "No, because customers don't know what they want until we've shown them." 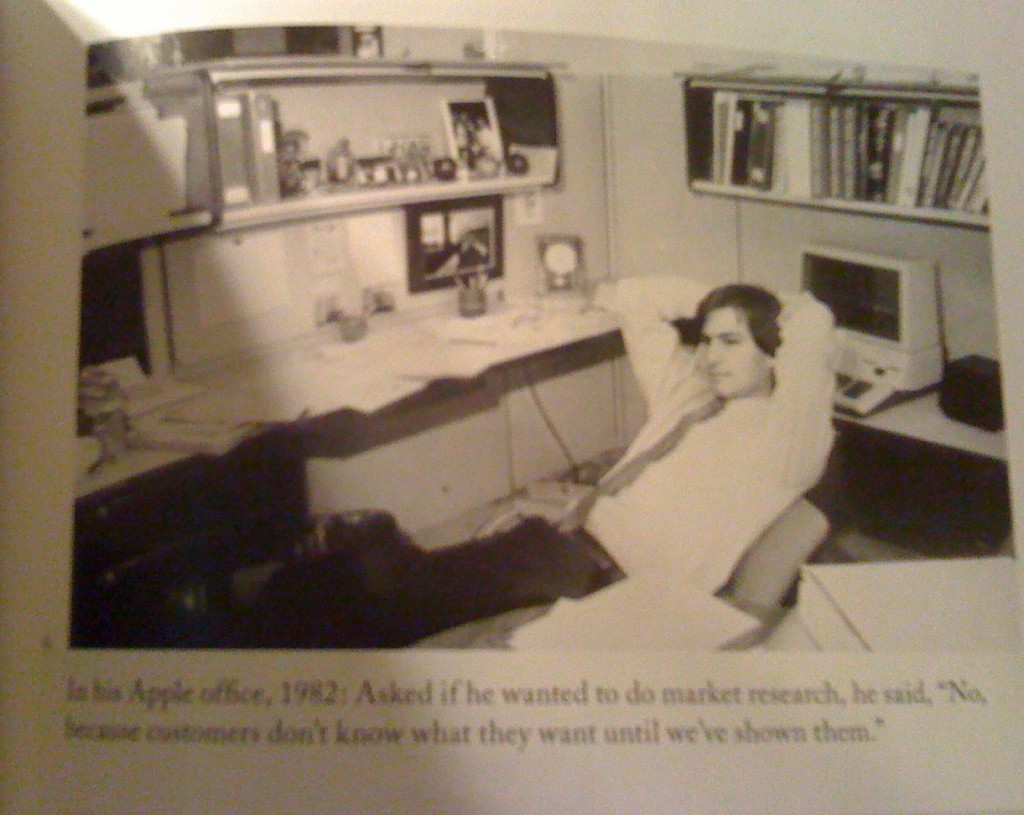 Steve Jobs in office in 1982 - The caption reads: In his Apple office, 1982: Asked if he wanted to do market research, he said, "No, because customers don't know what they want until we've shown them."

I wonder, in the language development movement and in the Bible translation movement, how many of the businesses involved in the “work” choose to take a reactionary approach to language communities, waiting for the communities to decide on and define their needs and then to find solutions for them. Rather than as a business innovating and creating solutions which do and will scale globally and also fit locally.

Well then, am I suggesting that the law of God is sinful? Of course not! In fact, it was the law that showed me my sin. I would never have known that coveting is wrong if the law had not said, “You must not covet.” But sin used this command to arouse all kinds of covetous desires within me! If there were no law, sin would not have that power. At one time I lived without understanding the law. But when I learned the command not to covet, for instance, the power of sin came to life, and I died. So I discovered that the law’s commands, which were supposed to bring life, brought spiritual death instead. Sin took advantage of those commands and deceived me; it used the commands to kill me. But still, the law itself is holy, and its commands are holy and right and good. Romans 7:7-12 NLT[ref 14]

My point here is that we could not know sin unless God showed us what we needed through the law. God took initiative to show us what we needed. And if we did not know sin how would we ever have known that we fall short or that we need a Savior? This speaks directly to the father’s initiative to find solutions for problems we did not know we have. Romans is not the only place which talks of God’s initiative in this direction. 1st John 4:19 also talks about this, in that God first loved us, before we loved him.[ref 15]

Yet in the language development and Bible translation industry the engagement (and service provision) practice is to let the customers define what the need is, and then try to describe it to the service providers. It seems kinda backwards.